Get in touch with us

A Brief History of Bondi Beach 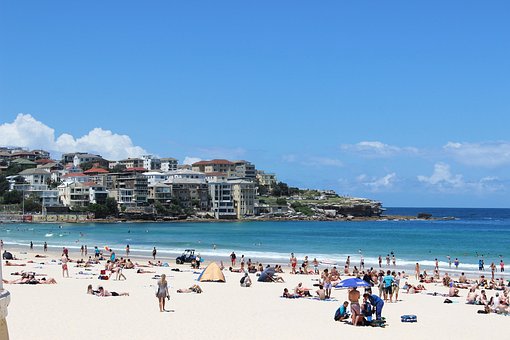 Bondi Beach in Sydney, Australia, is one of the world’s most popular beaches. It is primarily popular with visitors from the Northern Hemisphere, who can commemorate Christmas at the beach.
Bondi Beach is 4 miles east of the CBD, Sydney’s Central Business District. The word “Bondi” (pronounced bondie) is derived from an Aboriginal word having the exact same meaning as “surf” in English. In the mid-19th century, the property that consisted of the beach was part of the private “Bondi Estate.” For a time, the owners allowed the public to access the beach, which was famous for the size of its waves. When the owners threatened to obstruct access to the beach, the Municipal Council made it public in 1882. By the 20th century, up to 60,000 people a day were coming to the beach. On Feb. 6, 1938, referred to as “Black Sunday,” 5 beachgoers were killed and more than 250 injured when a series of huge waves pulled people into the water.
Bondi Beach has been the site of efforts to manage decency in swimsuit for both men and women. In 1935, the city government passed an ordinance governing the amount of skin that could be shown, leading to American starlet Jean Parker being escorted off Bondi Beach in 1951 due to the fact that her bikini was too revealing. The regulation was reversed in 1961 and topless bathing became popular. On Sept. 26, 2007, 1,010 women wearing small bikinis assembled on Bondi Beach. The resulting photograph, published in Cosmopolitan in 2008, established the Guinness record for the largest swimsuit photoshoot.
Today, Bondi Beach brings in about 2.5 million visitors a year, a number of whom benefit from the stylish cafes along the Campbell Parade that joins the beach. Guests to Bondi Beach can also enjoy rugby matches played on the beach by the Sydney Roosters.

Bondi Junction Should Be Your Next Holiday Destination!